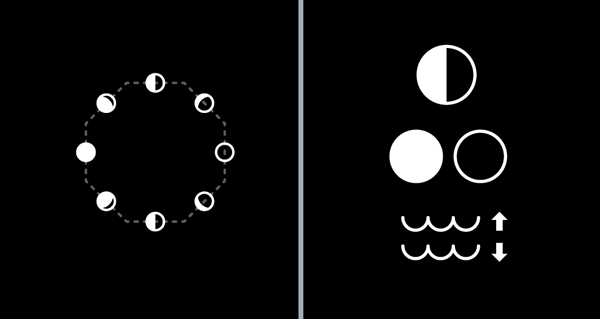 Three-branched tree motif with a moon crescent and crown. An Asherah reference?

“The menstrual cycle is the most basic, earthy cycle we have. Our blood is our connection to the archetypal feminine. The macrocosmic cycles of nature, the waxing and waning, the ebb and flow of the tides and the changes of the seasons, are reflected on a smaller scale in the menstrual cycle of the individual female body. The monthly ripening of an egg and subsequent pregnancy or release of menstrual blood mirror the process of creation as it occurs not only in nature, unconsciously, but in human endeavor. In many cultures, the menstrual cycle has been viewed as sacred.”
Christiane Northrup, M.D., Wisdom of the Menstrual Cycle, link

Just as Jesus/Jehovah exercised power of chaos in the creation of the world, the moon controls the tides. (water is often used as a chaos motif)

In D&C 76 we find the terrestrial kingdom compared to the glory of the moon and those that inhabit that kingdom as “they who receive of the presence of the Son, but not of the fulness of the Father” (76:77). The cycles of the moon mirror the fertility cycles for women and there are many strong connections in scripture between natural birth through our mothers and symbolic rebirth through the atonement Jesus Christ via the ordinance of baptism. One example is Moses 6:59 which states:

“inasmuch as ye were born into the world by water, and blood, and the spirit, which I have made, and so became of dust a living soul, even so ye must be born again into the kingdom of heaven, of water, and of the Spirit, and be cleansed by blood, even the blood of mine Only Begotten; that ye might be sanctified from all sin, and enjoy the words of eternal life in this world, and eternal life in the world to come, even immortal glory;”

“As also he is in the moon, and is the light of the moon, and the power thereof by which it was made;”
Doctrine and Covenants 88:8

“As also he is in the moon, and is the light of the moon, and the power thereof by which it was made;”
Doctrine and Covenants 88:8

“Thus saith the Lord, which giveth the sun for a light by day, and the ordinances of the moon and of the stars for a light by night, which divideth the sea when the waves thereof roar; The Lord of hosts is his name:”
Jeremiah 31:35

“The moon also had a connection to water in antiquity, the sun to fire; both are purifying agents destined to cleanse both us and the earth.”
Val Brinkerhoff, The Day Star – Reading Sacred Architecture (Book 1), 145

“The sun shall be turned into darkness, and the moon into blood, before the great and the terrible day of the Lord come.”
Joel 2:31

“It shall be established for ever as the moon, and as a faithful witness in heaven. Selah.”
Psalms 89:37

“And there appeared a great wonder in heaven; a woman clothed with the sun, and the moon under her feet, and upon her head a crown of twelve stars:”
Revelation 12:1

“But in those days, after that tribulation, the sun shall be darkened, and the moon shall not give her light,”
Mark 13:24

Three-branched tree motif with a moon crescent and crown. An Asherah reference?